teach me one of those harder lessons

The ego is greatly concerned with identity and as a culture we play into this neurosis by constantly assigning and reaffirming one's identity. Governments are keen on documenting all citizens and stamping a trail of discernible identifiable clues to confirm whom you are. Birth Certificates start off the lifelong attachment to identity reinforcing the conception of self as a separate causality. The explosion of online tools such as Facebook and Twitter are embraced for their ability to craft and showcase how we wish to be perceived and burying the faults, while a game like Second Life allows us some freedom from the conformist requirements of modern society. The machinations of the establishment run on confidence of a singular identity for all members of the system. Without this structure in place the world schema would be thrown into chaos. The bank is comfortable lending me money for a home and credits cards for purchases because there is a system in place that ties me to my identity and makes me responsible for what I do in accordance with the identity that has been crafted for me partly of my own volition and also in accordance with society's wishes. It would be hard for our society to function in a paradigm of fluid identity. Law enforcement would be thrown into shambles and the concept of personal responsibility, which guides polite behaviour, becomes null and void.

But the idea of a separate self this line of thinking promulgates is highly questionable. Take for example a city that has been built up into a fairly large metropolitan centre. The borders of the city are arbitrary and artificial and in accordance with this the incorporated entity doesn't actually exist though it probably has discernible landmarks and structures as well as prominent citizens that give it a (his) story that allows us to comprehend it as really existing. Except it doesn't. It's just something we have given form and identity to but upon dissolution, and all things are ravished by time to the point of destruction, it becomes just a memory; just a story we can either remember or easily forget. Now project the above onto your form and you can see how we are playing a part in this drama but to think we really are something is folly. It's a game foisted upon us since birth promulgated by a conspiracy of fellow players who also have no idea they are contributing to the charade. To deny a fixed identity is a step towards quitting the madness.

To be clear, the extreme left and right wings of the political spectrum that are both essentially domineering modes of state control do appear to downplay the role of the individual and thus identity. However though the individual is expected to conform to a position that best benefits the state, there is no fluidity of identity in these systems, just an inherent way to frustrate the individual so we all become dull and drab comrades or hypnotized followers of a demagogue.

However I return to the difficulty of constructing our society upon a bedrock that does not contain a modicum of personal responsibility. It is impossible to imagine humans running around in personal and societal anarchy. The difficulties seem insurmountable, but wait, what is the result of how we have structured the human condition here on earth? Our past is a gruesome and violent history of constant strife, suffering, and warfare interspersed with periods of peace and progress. The game we have chosen to play, buttressed by a strong dose of ego, has led to conflict and separation from each other as forces released into the world such as tribalism and its big brother nationalism convinced us to do cruel and horrible things to others because they are perceived as different and outsiders. On a personal level, the need for and accumulation of wealth so we can buy material goods that give us identity and status to further establish our bona fides that declare us as having made it in this wicked game we play, is frankly delusional and sickening. Is there a better way? Do we look towards what the Buddha described as the middle way? I would tend to say the answer does reveal a solution to this problem somewhere in the centre. Less emphasis on the individual and more on the sisterhood and brotherhood of all humankind would eventually through successive generations lead to more cooperation as a species and help deal with the escalating problems of racism and the polarization of national identities and religion that we face today. The eventual long term conclusion of this change in behaviour would hopefully lead to a profound realization that we all come from the same source and along the same line of reasoning the notion to treat someone any differently than you would treat yourself would be unfathomable because they are essentially a reflection of self.

The catalyst that has led me down this road of exploration of identity are events where my sense of self has been altered through the use of the teacher plants Ayahuasca and Huachuma. It was first off through my second experience with Ayahuasca, which perturbed my well established ego and sent me for a loop. I did not respond well to this challenge, rebelled, and tried to run from the medicine's attempt at knocking down the edifice of self. I remember being an hour's walk into the jungle in the middle of the night paranoid that the tangible paper and plastic establishment of my identity, my passport and credit cards, had been confiscated and I was no longer who I said I was. This was very frightening and it took almost a year to recover from that experience and I masochistically in time went back into the jungle for more of the same. I put my trust in the plant teachers and during this recent trip Huachuma presented to me a dissociative experience where I knew where I was at the time but my sense of self had vanished and in its place was a closet full of different identities I was free to choose from. Due to conditioning, I instinctively chose the one society has assigned to me but I realized there were so many more to choose from, with the caveat that society would then collectively label me as crazy should I indeed assume an identity that had not been approved to wear.

And that is what led to this essay.

The two portals of the horizon from which the sun comes forth and exits represents duality, specifically the bipolar nature of the intellectual mind. The mind can be thought of as the brilliance of the sun with the spark of intelligence within conscious humankind contrasted with the controlling hidden darkness to which we are loathe to admit. These two elements are forever contending. The ancient Egyptians called them brothers: Horus and Set and from this warring a popular piece of literature from the dynastic period of Egypt is called 'The Contendings of Horus and Set' which I have written previously about in this blog post. The name for this horizon 'god' is Harakhty, which has been translated as 'Horus of the horizon' which is incomplete in my view. 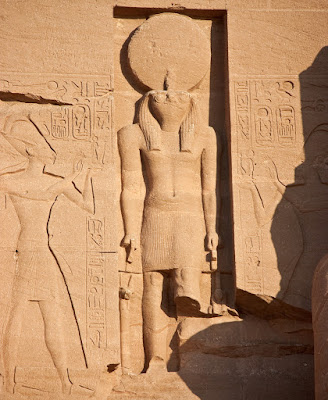 The proper translation in my opinion should be 'the two faces of the double horizon.' The hr is referring to a face, the akh(e)t to the horizon, and the y makes it plural. 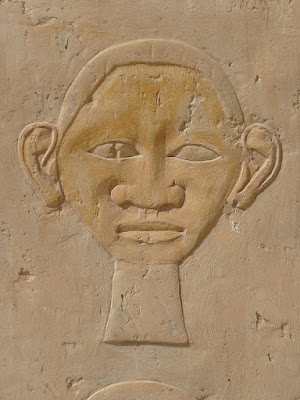 The iconography of Harakhty presents as a falcon, this divine predatory avian symbol representing at times not only Horus but instructively for the purposes of this essay also Set as shown here at the desert Temple of Hibis in the Kharga oasis. 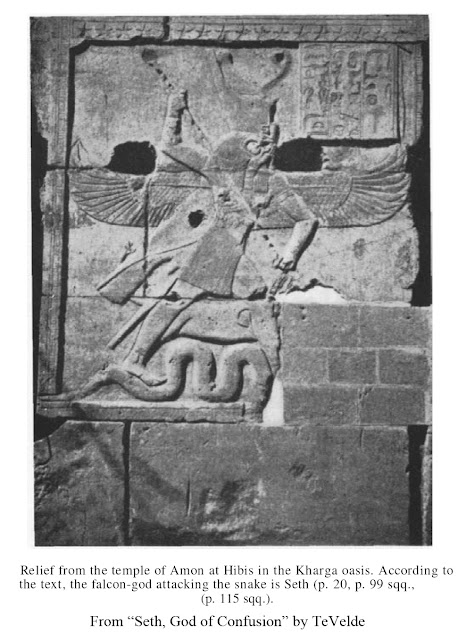 The renegade Egyptian Pharaoh Akhenaten's god, called by Egyptologists Aten, was early in its iconography at his desert outpost Akhetaten, referred to in the textbooks as Amarna, given the standard of the falcon and referred to as Re-Harakhty. The solar aspect of Re is recognizing the role of the light of the sun being inherent in the divine mind within the human race. The strength and path of the sun encapsulates all these principles in the ubiquitous luminescent orb and was collectively referred to as Aten. This long and detailed blog post delves into this most interesting topic. 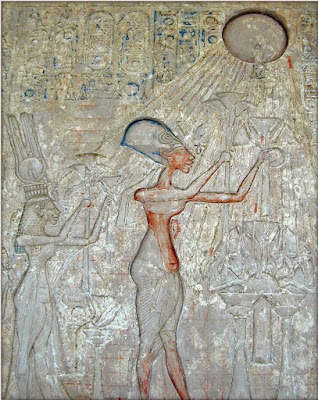 In Greek mythology the divine part of the mind is the god Apollo. His counterpart is the shadowy dragon Typhon, whom by this exploration into the myth is representing the lower self. Apollo slays this dragon at Delphi which enables the fabled oracle at Delphi. 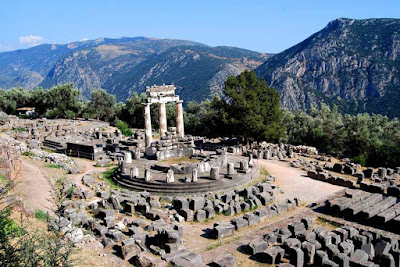 It's interesting to speculate on this myth. Does the freeing of the mind from darkness allow for the feminine intuition and ability to 'see' into the future to be tapped into? Or alternatively is it the lower self that is the oracle?

The great light of the sun coming forth by day is the intellect, the divine mind called nous in Greek. At its zenith, this ball of luminous light reaches up high into the northern sky. It enlightens the symbolic representations of the world axis such as the tree of life and the omphalos or world navel that connects us to the great mother. After the setting of the sun when the darkness takes over is the rise of the Pythian dragon Typhon; the brother of the divine mind that in our dualistic world becomes the adversary. This coiled basilisk serpent wraps itself around the world tree, the great mother, and reaches up into the pinnacle of the heavens demanding worship as the most high as it manifests in the northern circumpolar constellation of the dragon, Draco. 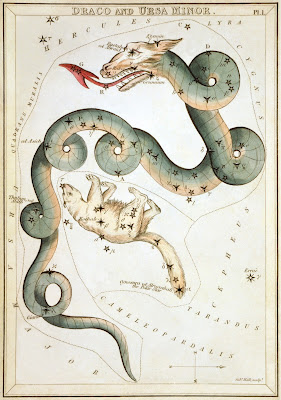 Taking the axiom 'As Above, So Below' and giving it a spin we can extrapolate 'What's Outside is Within' and in order for this inward perspective to come into the light the internal dragon must be slain. In order to understand the dragon in turn we must take our leave of light.