I wish to initially touch on 'The Contendings of Horus and Set' story from ancient Egypt concerning the homosexual acts perpetrated upon each combatant and from this position end up journeying intellectually into the Andes mountains. Horus and Set are the personification of the dualistic masculine mind that can be thought of as reverse images of each other. Another way to envision this is when the sun rises it is as Horus; when it sets it is invoking the power of Set, and this solar behaviour was combined into a deity called Harakhty by the ancient Egyptians. When Horus sees his reflection he should see Set and when Set looks in the mirror he would see Horus. 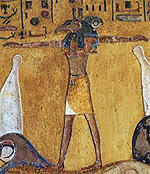 Set and Horus combined as Hrwyfy

They are of the same principle but performing the opposite action. Another example would be the interplay between the light and the dark. Without the other there is no distinction between the two; these opposites are what make up the created world and they operate as complementary waves each with its own peak. Set's attempt at sodomizing Horus is likely an attempt to prove dominance as it seems this behaviour was also used to depict the subjugation of other nations in that particular era. By foiling Set's attempt at penetrating him, and then using trickery with the help of Isis to get Set to ingest his semen, Horus is able to eventually prove to his elders that he is the dominant one able to conquer Set and lay claim to the white crown of his father Osiris and thus assume the dual kingship of Egypt. 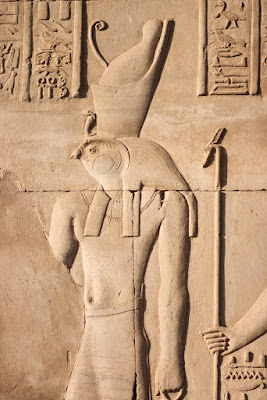 Horus at Kom Ombo with the double crown

This might seem unrelated but bear with me. I have been smoking jungle tobacco, called mapacho, regularly since August and one of the things it has helped me with is the dreaming. My dreaming for quite a while had been sporadic almost to the point of non existence and if I did dream I couldn't remember them. It seems mapacho provides a light into the visionary dreamtime and I now dream vivid story lines which I remember clearly almost every night. A couple nights ago I had this kind of disturbing dream, well I have noticed that my dreams run the gamut of behaviour and emotions so having this type of dream isn't necessarily uncommon, anyway this male figure appeared and eventually tried to sodomize me which was an uncomfortable situation to say the least. I resisted the attempt and then awoke kind of confused. The next day I was trying to make sense of what this was symbolizing when it occurred to me the metaphor concerned my other half, the dark side if you will, and it was trying to reassert its dominance over the light side. By resisting, it was a sign of where I am in my journey and is suggestive that the tables can be turned now and the light can dominate the dark if I so choose. However that leads to another line of thinking.

I had been reading of Pre Hispanic Mesa rituals in the Andes over the past month with the majority of the data cited coming from the Spanish conquistadors' observation and interviewing of the former ruling Inca class and the various nations they ruled over. The author of one book called 'Decolonizing the Sodomite' was able to bring to light and reconstruct some of the rituals by extracting meaning from the indigenous words used and by critically examining the pandering to the Inquisitors concerning the explosive issue of sodomy which the Spanish had witnessed as being practiced by the Andean people along with rituals where men would cross dress. My take on this is the Andean specialists, shamans called quariwarmi, who were dual gendered shamans that mediated between the symmetrically dualistic spheres of Andean cosmology and daily life, were tasked with reconciling this very thing I have been discussing in which they ritually were bringing balance back into the complementary pair of the masculine through ritual sodomy and then going further to establish a centre balance between the feminine and masculine through the symbolic act of cross dressing which invokes the idea of the third gender recognized as an androgyne. This is the idea of a hermaphrodite being present in their conception of what constitutes the all encompassing monad, the deity called Viracocha, and of which I have written extensively about in my critical examination of ancient Egyptian mythology. 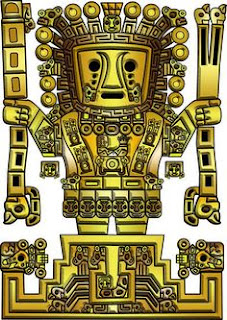 It would be proper at this point to explain the indigenous idea of 'tinkuy' as this is what the quariwarmi shamans were trying to achieve. Tinkuy is the joining together of complementary opposites through ritual mediation. It's all about bringing everything into the centre, the in between space, to find balance. This place was called the 'chaupi' and the central axis in this common territory was called the 'chhimi' which means the heart. It's interesting that what I can intuit as being the answer to the vexing problem of duality - love and the heart - was ritually mediated by a culture very in tune with this necessity and this was driven underground and pretty much destroyed by the conquistadors over 500 years ago.

Again while smoking mapacho the other evening this idea came to me as my mind faded away and I became the observer that while the masculine mind manifests the middle world and the feminine gives it form, the state the world currently finds itself in is largely due to the stubbornness of the masculine polarity. The mind has the capacity to know all and refuses to accept the need for the feminine's freely given love and wisdom in order to enact the perfect creation. The situation feels like the feminine is used to mainly birth creation and the masculine is confident from then on it can bring about utopia. The endemic stubbornness of rejecting love as the overarching principle for this most perfect world has sunk us into the abyss we currently are submerged in. The inherent duality that lies within the masculine mind is constantly in battle, symbolized by the light and the dark, and will never be at peace until surrender to love is viewed as a show of strength and not weakness. Love is always available to rectify this pathological condition if we so choose.

Here's another way to look at this: the two polarities of the omnipresent energetic force are the opposite attractors of feminine and masculine. Within each node of polarity (think of an alternating current) are the same sex pair described above which can be described as symmetrical though opposing - the Horus and Set never ending conflict that bedevils the masculine node. The idea of looking into a mirror and seeing a reflection of oneself describes this symmetry. Each polarity must balance its contending duality before becoming fit to mediate and reconcile its relationship to its polar opposite. Examples of this would be the dominate feminine traits of love, nurturing, healing, and sexuality harmonizing with warfare, destruction, pestilence, and chasteness. The resulting feminine iconography of the mediation of these characteristics produce ritual and symbolic displays of warrior goddesses with ithyphallic traits. Drawing on my knowledge of ancient Egypt this is iconographic in the goddess figures of the raging bringer of pestilence and healing lioness Sekhemet and also in the primeval combative and creatrix goddess Neith. 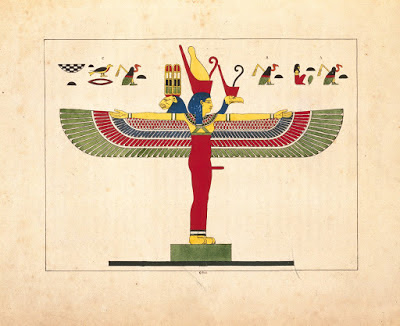 In ancient Greece this confluence of gender traits manifests in the warlike Athena who so attired can appear as what could be described as a female cross dressed. 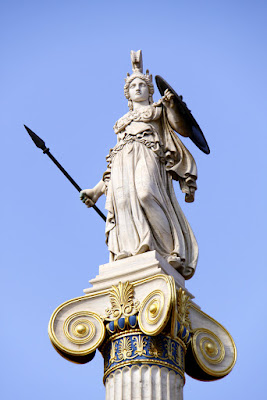 Athena adorning a column in Athens

This need for balance extends to the masculine traits such as aggressiveness, single mindedness, dominance, and righteousness being reconciled with compromise, inclusion, trust, and free association. This act of restoring individual harmony in our society is a difficult path to follow as the male's gender role is society is rigidly defined and deviation from that is considered effeminate and queer. However it is a recurring archetype and especially prevalent in the arts. The artist David Bowie is a perfect example of the Dionysian impulse that lays bare the societal exaltation of the alpha male figure. 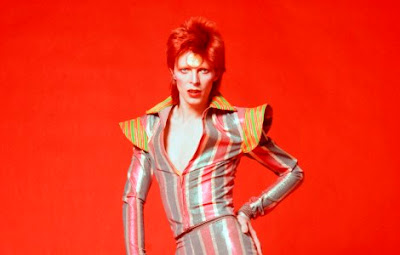 In my study of pre Colombian Andean cosmology it is revealed how in tune the various cultures were of the need to achieve this balance. Sacred performances involving cross dressing males, called ipas, were performed ritually to mediate the male tendency towards judgment and destruction. The masculine force, sufficiently tamed, would be prepared to be symbolically united with the opposing feminine force in a process called tinkuy. This balancing act and subsequent joining together of the opposing forces ritually recreates the original androgyne along a central axis bisecting the feminine and masculine polarities which in turn unlocks and radiates unconditional cosmic love and demonstrates this union is the origin of all there is and is represented in ritual and symbol as the mediated third gendered hermaphrodite.

Mountains can be considered these peaks of masculine power, the feminine would be the valley and rivers running through the landscape, and the indigenous people of the Andes referred to these landscape formations as Huacas - idols invested with elemental powers - and they are representative of these contending powers. The masculine will to assert dominance would anthropomorphically have one polarity declaring that they are the most high. Picture in your head two sine waves, each wave successively creates a mountain and a valley and when one aspect is at its peak and is dominant its complementary wave must be moved out of phase in order to keep it in check.

Sine waves out of phase

Combining these two waves in a harmonious relationship creates a figure 8; rotate the 8 ninety degrees and it's an infinite expression of all there is and all there will ever be.

Each power rises and falls, has its complementary power symmetrically opposing it, is mediated by its relationship to its opposite counterpart, and is checked and harmonized when the all encompassing powers cross in the centre. Indigenous wisdom that came before our marauding western civilization and now lost to intolerance and time, created this congruence through symbol and ritual and they strove to lead lives imbued with this idea of balance and reciprocity referred to as tinkuy.

So dark has become our situation that in order to change it a return to the archaic world of symbolism and ritual is much needed. The two estranged waves of masculine polarity, in order to be corralled, must be mediated to the centre where the wise and fully realized feminine power alone in her castle remains in wait for her lover to arrive.