The alteration of consciousness has allowed me to experience, albeit briefly, a love like no other. I’ve tasted the unity of all; a cosmic love that is bliss. I have been embraced by a Goddess I call my soul mate that makes me long for the time I leave this body and re-join her. This has been the most rewarding part of the journey and has been the catalyst towards the continual seeking of knowledge. Along the way I’ve learned a few things. Chief among them is that you cannot skip the step of first reconciling all within. We are all guilty of this. We taste the light and are very attracted to it so we head straight for it in order to shine and embrace our new-found holiness. I get it, it's pretty glorious to hypnotize yourself into that state, however temporary. We all realize the predicament we find ourselves in when we return home and the spell starts to wear off. We return to old habits and those in our life once again start to annoy us. We need another spiritual hit in order to get back to the heights of our newfound spirituality. Ram Dass said it best when he declared if you think you're enlightened, try spending a week with your family. It’s a never-ending cycle until you grasp the teaching. This class is designed to make you eventually realize that the serious work begins within the darkness of self. You are given a taste of the result but you never stay high. The adept needs to voyage into the depths and face it all. The desire demons are intent upon erecting obstacles to liberation along one’s path and reducing the human condition into a stunning display of weakness. When given a taste of power and desire fulfillment, we fold like one of those cheap canvas chairs. It has been a lifetime achievement to construct this complex being that you aren’t going to transcend with the wave of a wand.

The initial inquiry into the nature of self is fraught with the pitfall of the duality between light and dark. We see the light and it’s glorious, we are attracted to it, and want it. The roll of the expanded consciousness dice sometimes come up snake eyes and we plunge head first into the darkness. It’s a deeply upsetting psychological experience and the fear of this realm is off the charts. It’s called a bad trip and we try to subsequently avoid those returns. We come up with strategies and mantras, lucky charms, and the like to prevent that nightmare from ever happening again. It chases a lot of people away from continuing on with the class and those that forge ahead eventually learn how to navigate these nasty forays into the darkness of self. I count myself as part of the latter.
The master teacher is found in this darkness therefore when continuing on you eventually reach a point where if you constantly avoid the darkness then the experience is tamed. The knowledge available is so much greater than what you have been inviting in. At this point in your development, the crazy nights of the novice drinker are long gone. Sure, there’s still some apprehension but for the most part I know what I’ve signed up for. I’ve read a number of stories of some enthusiasts claiming Mother Ayahuasca has turned on or abandoned them. In reality, you put up the blocks and the course can’t continue the advanced lessons because you didn’t do the work. To continue the work involves surrender and letting go of control.
I think most of us are smart enough to eventually realize this predicament. Personally, it came outside of ceremony during the integration period. I document all my experiences and there is a paper trail detailing my success in learning how to navigate the ceremony which I learned by experience as well as taking advice from others who had developed strategies to move the experience towards the light. I think this is very valuable information, especially for a novice drinker who wants to continue on the path but has been given a one-two punch to the head and is wary about continuing on. As with all remedies, there are side effects and the end result of continually avoiding the darkness is an eventual taming of the whole experience. I got my spiritual bona fides during my trip to Peru in 2016 and in the final ceremony transformed into a jaguar. I knew at the time that an Ayahuasca ceremony would never be the same for me. I had reached a new level and was a worthy student on this path. I’ve been back since and it is true the experience has been markedly different. The next time I drank Ayahuasca, the experience was not dark at all which was pretty strange considering most of my initial ceremonies would take me straight into the darkness. The whole cycle of work reflected my mastery of the experience. Once again, I returned intent at peeking back into that darkness. Sure enough, through intention I went deep into my depths however it was not frightening at all. I got in but kept hold of the rope that would get me out. I know I have to let go of the lifeline if I’m to continue.
There’re two stages of fear in the inquiry of self. The first one, as I mentioned, is after the introduction to the darkness and you witness how unsettling it is. This causes the greatest number of dropouts. Eventually, if you want knowledge, you have to go back into the darkness. Chasing the light and bliss only gets you so far. You see unity and your place in the whole construct. You feel love for all. What about the hated and strife? To decide to go back into the darkness pretty much means by this point you have become a warrior and have the courage to face the fear. The knowledge of self is available to the intrepid seeker and it comes at you in ceremony and out of ceremony. A little bit at a time until you see it. Clarity arrives at your doorstep and it all becomes clear. Once you see it, you have to accept it. Fear creeps in again as you come to terms with this knowledge of self. To forge onwards, there’s has to be acceptance. You’re a warrior now and courage trumps fear.
I have wondered what Carlos Castaneda’s Don Juan meant by becoming a "man of knowledge." It’s for those who want to know, have courage, and aren’t afraid of truth. It’s been over the last month that I became a man of knowledge when I added up the sum of my experiences in altered realities and my growth into the strong warrior I have become. The man of knowledge recognizes the inner strength within and its relationship to a darkness that is the master teacher, whose school is not for the weak, and doesn’t suffer fools for long. The student is to master their desires and become free. Once accomplished, the power through this liberation is yours and it's refined power, not the kind used for gain or to fulfill desire.
Upon taking up my cross and embarking on this spiritual journey, not in my wildest dreams did I think I would end up at this place standing on the doorstep of something so unbelievable and confounding. Not only that, but I’m not running for the hills. I had a tinge of fear and disbelief upon learning the identity of the master teacher but the allure of this strange mystery just continued to beckon me towards a rendezvous with destiny. The door is unlocked; all I have to do now is walk in and take hold of my fate.
Posted by Apollo at 9:00 AM 0 comments

The divine feminine and masculine come together in the centre of the grand Mesa at the axis mundi here in the symbolic expressed by the lanzon from Chavín de Huantar. 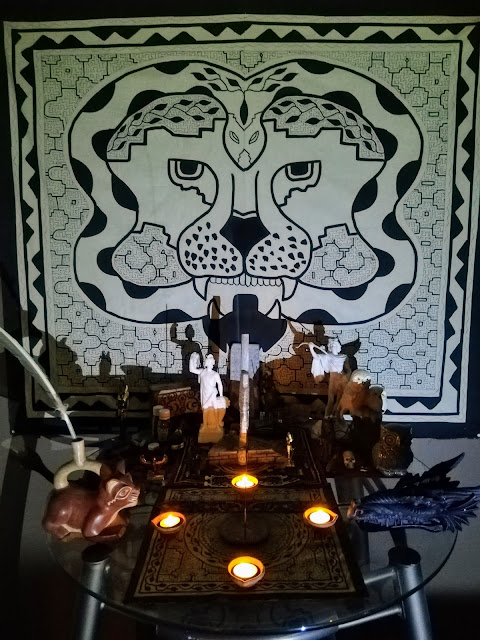 The axis mundi is in the centre and the table is full of differentiated expressions of this energetic centre. However, overlooking this whole construct is this image of a jaguar within the form created by a serpent. Somehow, I knew the archetypal two lay at the head of what just is and I left it in place to discover at a later date in my journey to nowhere. The two become one and the one becomes the many. This is the divine lineage from which we all come.
Posted by Apollo at 9:00 AM 0 comments

Consciousness is what is. Our universe is the result of mental processes that I can explain by metaphor such as the dreaming mind that creates worlds. Our individual capacity to do this is primitive; imagine mastering dreaming, which at this point of proficiency would be having control over your projection of consciousness. With this ability as the creator, you can create innumerable worlds designed to challenge or entertain and within these worlds we would naturally leave avatars for the perceptive among us to make the connection back to source, as the actions of these symbols leave undeniable clues for the initiated. The mystery can’t be mysterious without these subtle clues; instead it is just forever unknown and well, where’s the fun in that game? Consciousness as a singularity further consists of two opposites, the divine feminine and masculine polarities. The feminine creates form and the masculine is the magical energy that brings the form alive. To conceptualize this, here’s an image of a serpent and a jaguar. 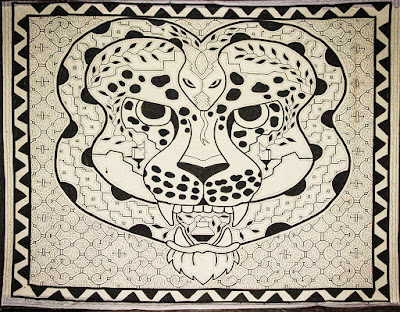 At the close of the ceremony the third time I drank Ayahuasca in 2013, I went to the washroom and on my way back I stood against the handrail on the path back to the maloca and looked out into the jungle on this glorious night that was lit up by the full moon. I looked to my right and it was divine. The jungle was radiating the light of the moon and the plants were 3D extruded. I looked to my left and the path was dark, dull, and lifeless. I looked back right and sure enough it was bathed in an enchanted spiritual light.