The eye of Horus is a representation of the energy contained within the waxing and waning of the moon which is feminine Goddess energy. 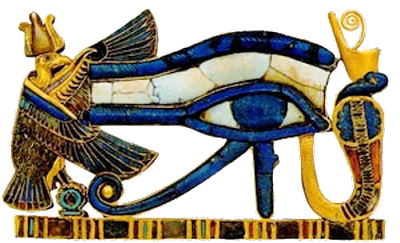 The two ubiquitous ancient Egyptian eyes, left of Horus representing the creative feminine right brain lunar energy, and the right of Re representing the analytical masculine left brain solar energy, are both serpentine goddesses. Wadjet, an emanation of the goddess Hathor (literally the house of Horus), is the serpentine left eye while the raging goddess represented in the form of the lioness goddesses Sekhemet (Hathor's wild and destructive side) or Tefenet are representative of the right eye. 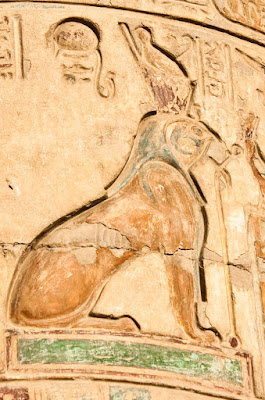 Wadjet as a cobra with Horus as the lion king

Sekhemet from the temple of Hathor in Denderah

Horus is the distillation of wisdom and light, born of the goddess Isis (the womb for the soul in the material plane) and her husband Osiris (Osiris is the eternal light that comes here and dies upon incarnation into matter). The birth of Horus is your story of awakening to an understanding of whom you really are. Feminine energy, which is love, reconstitutes the light soul which you literally see in the moon as it grows and thus the eye of Horus is fractional journeying towards wholeness.

The full moon is expressing the maximum light this vessel can hold and at this point you can transfigure yourself into a pure luminous being of light and transcend the material plane. If you cannot then the light is attacked by the powers of darkness and you head back cyclically for another incarnation, just like the moon.

The right eye, the eye of Re, is the distillation of the masculine force that is the impetus that propels us onwards in our journey in the physical realm. 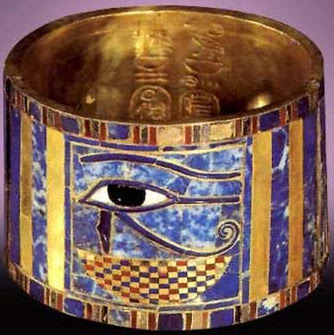 A bracelet of pharaoh Sheshong II depicting the Eye of Re

Re as represented by the cyclical path of the sun is demonstrating the relentless and goal oriented resolve to complete the daily task of the rising and setting of the sun. The Goddess that encapsulates the spirit of this eye can rage at times and cause much destruction in her wake. In ancient Egypt we have in their myths Sekhemet coming down to destroy mankind at the behest of Re and also the story of the goddess Tefenet leaving the land of Kemet in a huff, and departing for Nubia to which the gods Shu and Thoth are sent in order to bring her back to Egypt. These tales are presenting how destructive masculine energy can be (think war) if not channeled into a more beneficial state.

Within each of these individual paths as represented by the eyes also contain the dualistic notion of the feminine and masculine. Within the eye of Horus are the feminine Hathor who exudes a soft feminine vibe and the masculine Horus who grows up to be an enlightened ruler and this is true of the eye of Re where paired with the masculine Re is a feminine counterpart such as Sekhemet. Much like Re, Sekhemet can be unpredictable and rage as well. These two Goddess serpentine eyes that are in addition representing the feminine and masculine principles, the yin and the yang, reveal to us that in the ancient Egyptian cosmology it is ultimately the feminine that is the impetus behind the forces which enliven and enlighten the material world. These two eyes are referring to two paths which present themselves to the seeker of higher knowledge and these paths must be reconciled to each other in harmony in order for the adherent to progress on their spiritual journey. It can be thought of as the alchemical union of the soul and the spirit, the heart and the mind, Sophia and the Christos, Wisdom and the Logos, Mary Magdalene and Jesus Christ, Beauty and the Beast, the idea of the sacred union called the Hieros Gamos, and so on. At its core it is what the higher practice of shamanism is all about - the reconciliation of the opposites. The same principle was the guiding light behind the alchemists of the middle ages in their search for alchemical gold. The true practitioner of this esoteric art was indeed searching for the magical elixir of transformation that a combining of the feminine and masculine would constitute. The moon and the sun as two distinct paths can be harmonized in the middle as an axis mundi of sorts and the result is a transfiguration of the soul in a process the ancient Egyptians described as becoming an Akh. The Akh is a transcended soul of pure luminous light, usually depicted as a white jabiru stork that has the connotation of wisdom reflected in the form of the lunar god Thoth. 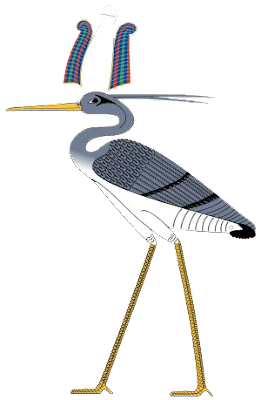 Within the ancient Egyptian cosmology is always present iconographically a reminder of the dualistic paths of life that must be reconciled in order to master this class we call consciousness. The eyes we see depicted in their art are another striking example of their eternal genius.

Sometimes looking at a problem from a different perspective can be quite illuminating. For instance, there is the idea that the brain generates the consciousness within our body and as a result we have a mind. How about the opposite? Our mind has a body and the brain within that body is generating our particular conscious reality. To ponder that is quite an eye opener and it is an invitation to think even more deeply about the implications. Ultimately though it's an institutional way of thinking about this situation and that would leave out any intuitive or spiritual aspects of what constitutes occluded reality. When I was presented with the idea of the mind having a body it appealed to me because during altered states of consciousness I have experienced I have either viewed myself in the third person or was aware of my presence as light in the vision. This is a concept where this 'mind' has an avatar, which is the body, and much like in a video game the mind can control the actions of the player. The brain of the avatar acts as a reducing valve that limits the consciousness expression within the life form, allowing and limiting the avatar to acting on what it can perceive. As many have noted with psychedelics, especially Aldous Huxley in his book 'The Doors of Perception', these reducing filters are bypassed and one becomes conscious of much more than had been previously experienced. 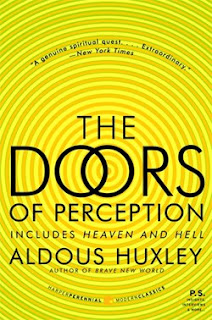 The avatar then can become more aware of the environment it is in. Why would this mode of exploration of consciousness originally have been made available to the avatar to discover? Well combining what I have learned with this new way of thinking I have my own ideas.

The 'mind' in question controlling the avatar is what I would describe as the mind's reduction into consciousness now being the combination of the right and left half of the brain. To further elucidate what I mean, it has to do with what I call the soul or heart space that is the right half and the analytical, no nonsense left half. Furthermore I have been able to separate my modes of cognition into what I call the ego mind and the heart space. The left brained ego mind is very judgmental and competitive, it is interested in establishing a separate identity, and it views the self as autonomous. When taking in life through the heart space we feel very connected, we can experience a deep feeling of love for oneself and each other, and we wish to help one another. So in essence a byproduct of the brain acting as a reducing filter that has divided cognition into two halves, is the production of an autonomous entity called an ego that is created by an over reliance on the critical left brained thinking and the ego has in turn usurped local control of the avatar by shunting the right half aside. The ego in turn then becomes prey to malevolent forces within its psychic sphere; the malevolent forces then use the ego to control the avatar and along with that control the attached soul is essentially buried. The ego mind has done such a good job at obscuring the heart space that we have pretty much forgotten our true origins, though there are faint echoes when we peer back into history or if we are very perceptive we can see it in our mythology and fairy tales and echoes in history do remain of this lost nature of ourselves in our religious stories.

The abduction and rescue of Helen of Troy in the Iliad.
Persephone and her descent into Hades, from which she returns to life.
The descent of Orpheus into the underworld to rescue his wife, Eurydice.
The return of Odysseus to his kingdom, Ithaca, to reclaim his wife, Penelope in the Odyssey.
The rescue of Andromeda by Perseus.
Sleeping Beauty and her need to be wakened by Prince Charming.
Cinderella being the treasure hidden away waiting to be discovered.
Rapunzel trapped in the castle and discovered by a prince.
Ishtar's descent to the Underworld in the Epic of Gilgamesh.
St. George's slaying of the Dragon to rescue the Princess.
The rescue of the kidnapped Sita by her husband, the god-king Rama, with the help of Hanuman in the Ramayana.
Dorothy and her longing to return home in the Wizard of Oz.

Our prized left brained way of analytical thinking has further alienated any chance of recovering the lost piece of who we completely are. The pinnacle of intellectual inquiry is now firmly materialistic. The soul is the fount of wisdom to which we need to reconnect. It's the imperishable 'mind' that lies dormant within all of us.

Taking this further is the idea of all of consciousness being a 'mind at large', a sum total of everything. Through the use of psychedelics you can enter into a conversation with such an entity that seems distinct from your conscious self. I believe this is where in some cultures this has been interpreted as being the spirit of the substance used to enter into this state. Examples would be the Aztecs use of psilocybin mushrooms known as "Teonanácatl" which means god mushroom. Also popular psychonaut Terence McKenna in his lectures would refer to the mushroom speaking to him during his trance and there are the numerous examples in history of the veneration of the mushroom. To me, this mind at large is the Logos, the spirit, the Christ who is the origin of all knowledge and understanding. This access to spirit is also continually under attack. This is the attack on the divine masculine that is found in traditions throughout the world.

Osiris' dismemberment at the hands of Set.
Dionysos ripped apart by the Titans.
Jesus Christ's crucifixion by the collaboration of the Jews and Romans.
Abel's slaying by his brother Cain in Genesis.
The yearly ritual slaughter and holocaust perpetrated on the lamb in the Torah.

By now you may see where I am going with this: the sleeping soul, Wisdom, must awaken and reconnect with the Knowledge found at the feet of the master, the Logos. It's the heavenly sacred marriage of Sophia and the Christos or the earthy conjunction of Mary Magdalene and Jesus Christ. The placement upon the earth and the intent for the use of psychedelics is a bridge to lead us back to this union if we use them wisely.