falling snowflake
on a simulated existence.
nature is foreign
to your desolate soul.

playground hubris,
victorious over myth.
senses are reality;
can you ignore your heart?

opening to light,
may make you think.
Darwin freed us from religion,
not the journey.

Picking up from the last blog where we took a look at Osiris and his relationship to the constellation Orion, we now try to find the warlike Orion in ancient Egypt. The pharaoh of Egypt often was depicted in the folded arm pose of Osiris but was also known as the living Horus and often depicted in a smiting pose. Could it be the old Hermetic saying about ancient Egypt "so as above, so below" is true in this case as well? The story of the murdered Osiris and his reconstitution by his sister-wife Isis I have detailed before. Isis is impregnated by the resurrected Osiris and from this union is born the baby Horus. The son of Osiris, Horus, grows up and fights Set for the kingship and the right to sit on his father's throne. This would be the "below" part of the equation. However if it is true that what has taken place on earth must have taken place in the heavens then we should be able to find this story in our night time sky. We know of Osiris and his association to Orion and Isis and her association to the beautiful shining star Sirius. So in theory we should be able to find Horus and Set close by presumably fighting.

We find many iconic examples of the pharaoh in ancient Egypt in a smiting pose often with Horus nearby or even Horus as a falcon wearing the double crown depicted with an upraised arm. Here is a facsimile from the Royal Ontario Museum of the famous Narmer palette depicting Narmer about to strike his enemies. The name Narmer means "striker" and is most likely an abbreviation for "Horus the Striker."
Writing: Theory and History of the Technology of Civilization, by Barry B. Powell, page 28. 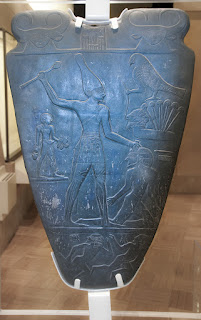 Approaching the Temple of Horus at Edfu you can't help but notice the huge reliefs of a pharaoh from the Ptolemy era striking his enemies on both pylons that flank the entrance. Looking on is Horus the Elder, known in greek as Haroeris. In hieroglyphics his name would be transliterated as Heru-ur or Har-wer depending on whether you transliterate the quail chick as an 'u' or a 'w'.

Here is Horus on the battle axe that the pharaoh is using to strike his enemies. 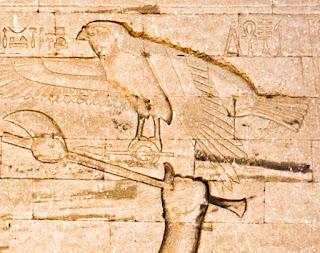 This is from inside the temple from a scene where Horus is harpooning Set who has manifested as a hippopotamus. 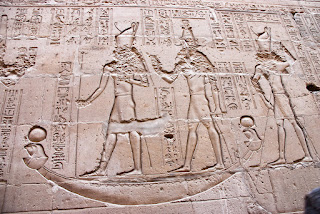 Here is Ptolemy XII in the smiting pose at the Temple of Isis at Philae. Notice the pharaoh offering to the seated Horus in the upper register of the pylon. 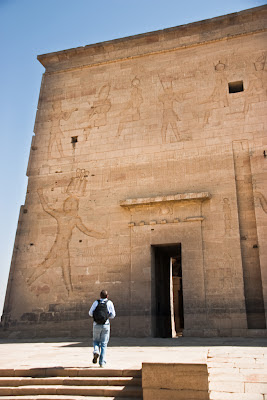 And one more - the pharaoh Den of the 1st Egyptian dynasty striking his enemies with Horus and Wepwawet looking on. 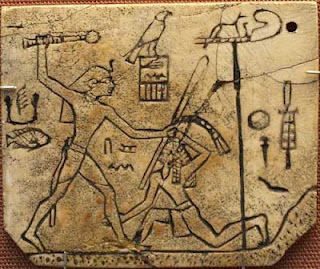 Alright so it's established that the martial pharaoh is usually represented on the monuments in a striking position in the presence of Horus and not Osiris. So then who is this Horus the Elder? Instructive is the ancient Egyptian name for Horus - Heru. The 'u' tells us of the plurality of this ancient god. Horus the Elder is the grown up Horus and always represented with the head of a hawk. This is the mature Horus who is able to avenge his father's death at the hands of Set. Horus the Elder is the great god of light, the ur or wer part being the ancient god of light known as "the great one." The younger Horus, who is depicted as a human baby is the enlightened soul within you that is the result of Isis' impregnation by the seed of the ba soul Osiris. This baby is hidden amongst the reeds of the marshes of lower Egypt - a metaphor for his birth into the material plane of existence. So is this Horus the Elder the upright Orion who is in a striking pose?

Orion first appears in the east at nightfall in late fall and he rises on his side with the three stars of his belt pointing upwards. The imagery here is unmistakable if you have been to the Osiris chapel in the temple of Seti I at Abydos.

I always thought it was strange that his son Horus was present in this scene but it starts to make sense if the imagery of Osiris rising in the night time sky becomes his son Horus when upright and ready to strike. So is there evidence from the ancient texts that Orion could be Horus as well?

In the Triumph of Horus, which are texts taken from the walls of the Edfu Temple, Horus is described by the narrator as "…Him with the upraised arm."

In Plutarch's essay on Isis and Osiris he describes Orion as thus:
"In regard not only to these gods, but in regard to the other gods, save only those whose existence had no beginning and shall have no end, the priest say that their bodies, after they have done with their labours, have been placed in the keeping of the priests and are cherished there, but that their souls shine as the stars in the firmament, and the soul of Isis is called by the Greeks the Dog-star, but by the Egyptians Sothis, and the soul of Horus is called Orion, and the soul of Typhon the Bear."

Orion in his striking pose is Osiris come as Horus to do battle with Set. So we should be able to find this Set close by right? We will leave that question for the time being. 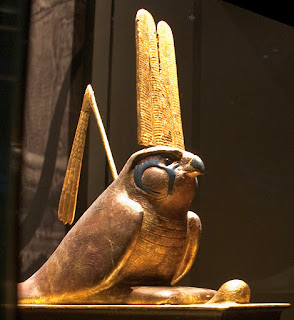 Sopdu was the scorching heat of the sun in the summer which hints at Horus as light providing the sun with its power. Shortly after Sirius would rise in its yearly cycle the hot scorching summer days would be upon the lands due to the birth of this Sopdu. Sopdu was considered to be war-like because of this destructive heat. Because of this, Sopdu would be depicted with a long axe.

One last thing - the ancient Egyptians considered light to be the great principle of intelligence and wisdom that was the fountainhead of the universe; though you will be constantly told they worshipped the sun. The sun to them was the living enclosure which contained this light. In this aspect it was called Aten. Together the light and sun disk was Re. The great one of light is Horus and it is his story that is the story of the light that comes to incarnate in matter, specifically you and I. We are all Horus, we are all a part of this great light.

Next blog a key to unlock the mysteries of time will be given out!
Posted by Apollo at 10:30 PM 2 comments

material celebration
in a carnival of despair.
misprinted self,
where is home?

echoes of Egypt,
permeate my soul.
your greatness retreated;
why did you leave?