easter, eggs, rabbits and you

Springtime is certainly glorious with life re-appearing from what seemed dead in the winter. The sun grows stronger and the concentration of light increases with each passing day. Usually heralding in this change is Easter, my favourite of our modern religious festive celebrations. A quick perusal of the late March and early April calendar this year is of no use. I can't find Easter. What's up with that?

April 24 is the anointed date this year for Easter. Easter is determined by a few factors; the first one being the vernal equinox, which is the solar demarcation of spring here in the northern hemisphere. The second factor is the moon, specifically when it is full for the first time after the vernal equinox. The third and final determining factor is Sunday. Easter is always celebrated on a Sunday in the Christian Church so if the moon is full on a Tuesday you still have to wait until Sunday to pay homage to the resurrection of Jesus Christ. This year the first full moon is actually on a Sunday, that date being April 17. However, Easter is celebrated on the first Sunday after the full moon so we have to wait as long as possible this year which is why the calendar shows April 24 as the day in 2011 that we celebrate Easter.

Well that's all good and everything and I'm sure there's a Catholic explanation for the above determination. Yet I have lots of question to ask about this. I'm going to list them off now:

Where does the name Easter come from? I can't find it in the bible and I can't find any commandment from Jesus or Yahweh to celebrate this day.
What's with connecting Easter and Jesus to solar phenomenon?
What's with connecting Easter and Jesus to lunar phenomenon?
Why is the Christian Church big on Sunday and not on the Old Testament traditional day set aside for worship, which is the Friday sunset to Saturday sunset Sabbath?
What's up with the rabbit in the mythic pagan lore that we can't seem to separate from the Christian resurrection story?
Last I checked a rabbit doesn't lay eggs. Why does this rabbit wander around giving out eggs. That makes little sense. Where does this come from?

Easter is a name that just about everyone can agree comes from pagan lore.  The Online Etymology Dictionary gives the history of the word Easter as such:


Easter
O.E. Easterdæg, from Eastre (Northumbrian Eostre), from P.Gmc. *Austron, a goddess of fertility and spring, probably originally of sunrise whose feast was celebrated at the spring equinox, from *austra-, from PIE *aus- "to shine" (especially of the dawn). Bede says Anglo-Saxon Christians adopted her name and many of the celebratory practices for their Mass of Christ's resurrection. Ultimately related to east. Almost all neighboring languages use a variant of Latin Pasche to name this holiday. Easter egg attested by 1825, earlier pace egg (1610s). Easter bunny attested by 1909.
http://www.etymonline.com/index.php?search=easter&searchmode=none

So that confirms the pagan origins of the name but I think we can go even further than that. I was given some really good advice about four years ago; that advice being all roads lead to Egypt. However it is true that historically all roads have been said to lead to Rome. If you take the path to Rome you do so at your own peril! Anyway this goddess I can link with ancient Egypt. Most of the cursory knowledge that we have of ancient Egypt and what is taught to us in school comes by way of the Greeks. Therefore we tend to be given the hellenized names of the gods and goddess of Egypt. However because the hieroglyphics have been deciphered we can and should use the proper Egyptian names and not the Greek translations with their inherent corruption when the sound could not be properly transposed. This goddess is Isis, her Egyptian name being Aset. In the Egyptian tale of Isis and Osiris, Isis eventually revives Osiris so that Osiris can impregnate her and from this union is born the child Horus. Osiris' proper Egyptian name is Asar and Horus was known as Heru. Digging deeper into this myth this story tells us about this child that is waiting to be born within all of us. Osiris is the spark of light, the spirit, that is inserted into the metaphorical womb within all of us known as Isis as this passage from the temple walls explains.

From Karnak there is an inscription calling Osiris 'he who resides in the house of conception' alluding to the impregnation of Isis and the consequent birth of Horus.

-The Routledge Dictionary of Egyptian Gods and Goddesses, by George Hart, pg. 120

However Osiris is inert due to this journey into the womb of matter as Set, the personification of the animal/beast within us, tricks Osiris and leaves him for dead. Isis labours to revive Osiris all the while having to avoid her brother Set, who aims to make sure Osiris stays inert. Set ultimately represents our carnal desires which when we follow them never allows the development of our greater self; however the ancient Egyptians knew the importance of satisfying these desires of the Ka and did not leave that to chance. In this great myth Isis eventually perseveres and resurrects Osiris so that our greater spiritual self is born from the union of spirit and matter. This new life is then tended to by the great mother Isis until it is strong enough to take on Set, as we all know Set is going to keep leading us into temptation regardless of our spiritual attainment.

The ultimate message from the story is that the spirit that comes to earth must die and be resurrected in order for the greater spirit to be engendered in us. I'm reminded of Saint Paul's teachings in the New Testament such as in 1 Corinthians 3:16:

"Know ye not that ye are the temple of God, and that the Spirit of God dwelleth in you?"
-King James Version

"Wherefore he saith, Awake thou that sleepest, and arise from the dead, and Christ shall give thee light."
-King James Version

It seems quite clear that Easter comes from the story of Isis and Osiris. The designation Easter is pretty close to Aset with the er part meaning light or rays of light, specifically coming from the ancient Egyptian image of eternal light known as Re or Ra.

Not convinced yet? I went to Egypt a few years ago a took a lot of pictures. Here's one I took in the temple of Seti I in Abydos: 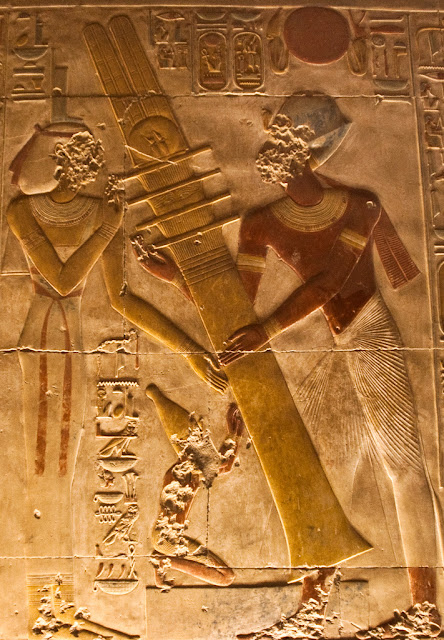 Aset is on the left and in the upper left you will see Aset spelled out in hieroglyphics.  Reading from right to left the AS in denoted by the chair or throne. T is represented by the top half of the half circle and symbolizes land or matter. So you have Aset as the queen of matter. The E in Aset is something we moderns have placed in the name to help with pronunciation as vowels were not used in ancient languages. The sound was implied by the use of the glyph. We can only take educated guesses at to what the sound was but in many cases it can be discerned from the Greek or Coptic use of the name. Below the half circle glyph is an egg. The egg was usually included when writing out Aset's name on the monuments. The egg to me symbolizes the potentiality that resides within Aset, which is Heru. It is analogous that within each of us is the seed or egg that will become the enlightened soul. You need to rouse Asar from his sleep of death in order to do that. Looking at this photo again that pillar they are raising is called the Djed pillar and is a symbol of Asar. They are raising the pillar so Aset can be impregnated by Asar's seed allowing that egg to grow.

So we have Easter and eggs now connected with Isis but what about that cute little bunny rabbit? Rabbits have long been known for their prolific ability to procreate but have also been observed burrowing into the ground and then springing forth from the ground like they have been resurrected. This is much like a seed buried in the earth or matter would do in springtime. Well it just so happens that an epithet of Osiris was "Unnefer". Unnefer means to manifest, open or appear in beauty. In this guise Osiris was portrayed with the head of a hare.

So when you wake up on Easter remember Osiris is giving everyone of us an egg he has quickened through his union with Isis. That egg is your ticket to immortality. Don't drop it.
Posted by Apollo at 5:16 PM 0 comments

life has stained,
desire has darkened.
tarnished is my heart,
luminous is not my soul.

the mask I wear,
it does not shine.
the light within,
lies in wait.

turn my desire inwards,
become my obsession.
turn on my heart light,
bleach my soul.
Posted by Apollo at 9:48 PM 0 comments

the end of time

Our concept of time comes from the cycles of the sun and moon.  Our modern concept of time is linear in scope.  However the sun and moon are distinctly cyclical in scope.  So there are really two concepts of time which the ancient Egyptians articulated as neheh and djet.  To the natural philosopher then, time is inherently cyclical in its natural state.  To the modern mind that is a conundrum as we are conditioned to believe everything has a beginning as well as perhaps an end. 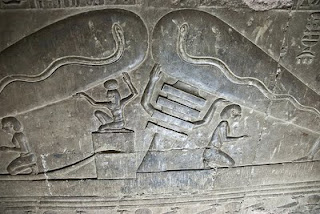