i am the music 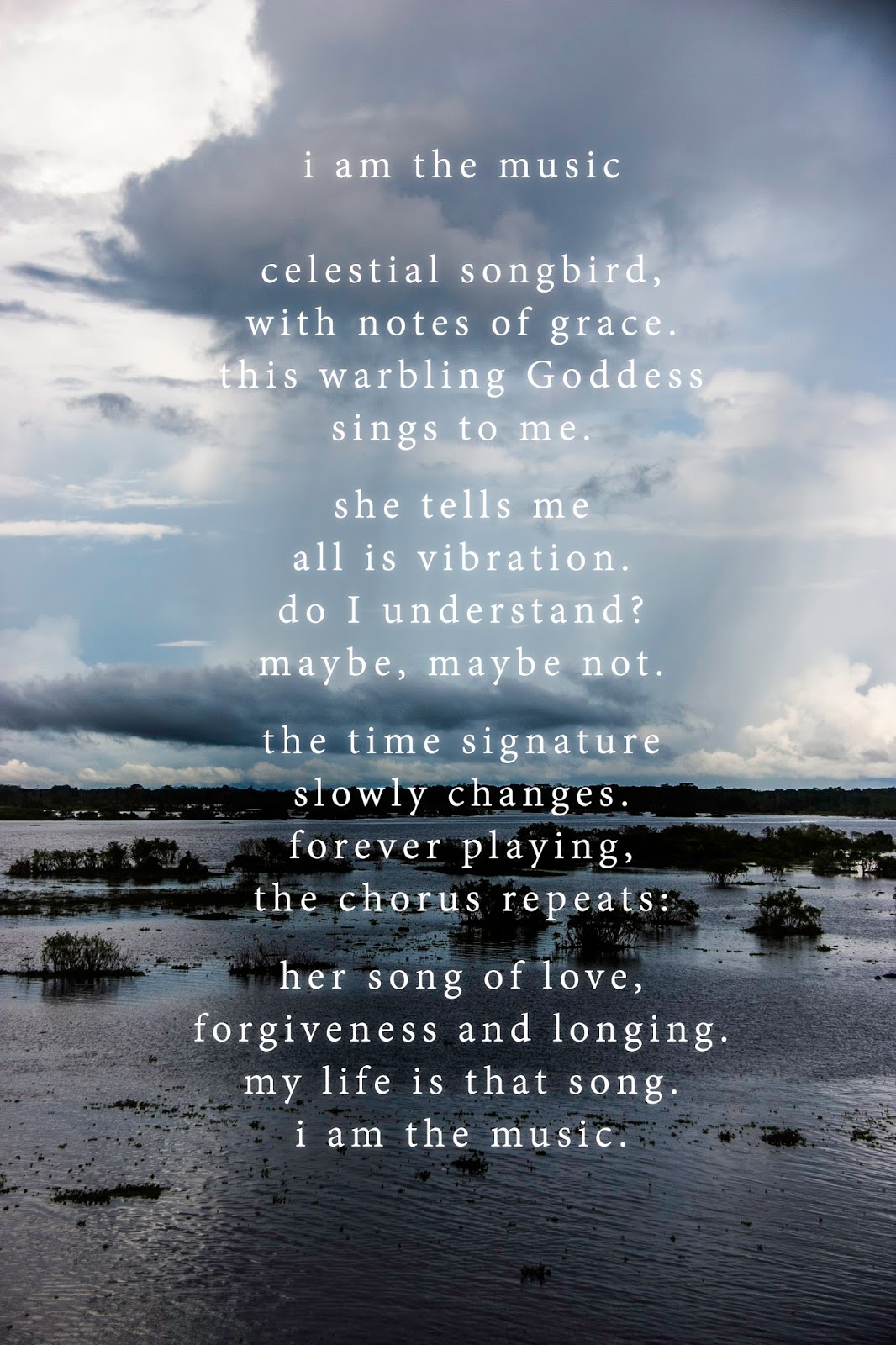 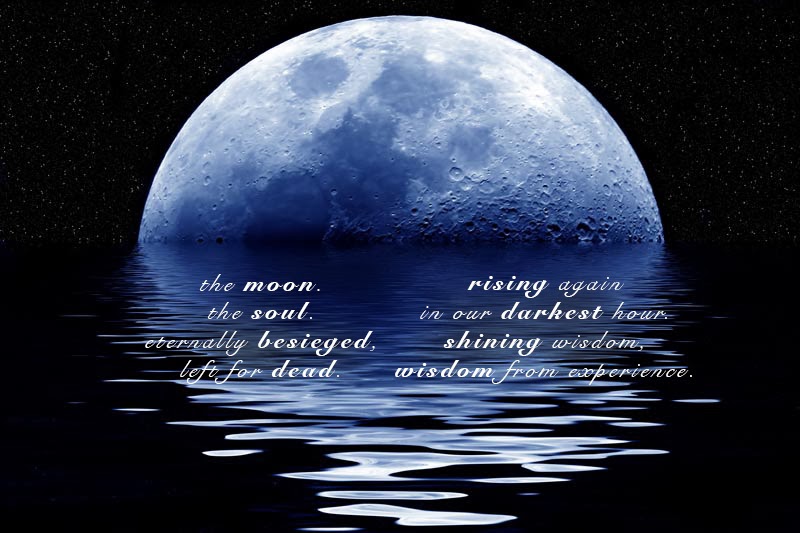 In conjunction with my previous blog post: mirror, mirror, on the wall that describes the relationship of the Goddess to the visionary experience I felt it necessary to comment on the role of the malevolent hag or witch that is also prevalent in mythological lore concerning witchcraft. To get started let's do some research on some concepts connected with witchcraft. Putting a magic spell on someone is the idea of a hex. The Online Etymological Dictionary gives the origin of hex as the following:

hex1 [heks]
verb (used with object)
1.
to bewitch; practice witchcraft on: He was accused of hexing his neighbors' cows because they suddenly stopped giving milk.
noun
2.
spell; charm: With all this rain, somebody must have put a hex on our picnic.
3.
a witch.
http://dictionary.reference.com/browse/hex

One thing that stands out for me is the pronunciation of hex as heks. In ancient Egyptian the idea of magic was attributed to a male deity named Heka.

Magic was understood to be a force that was not necessarily evil; it could be used for both good and bad purposes. As opposed to a glitzy conjuring, the idea of magic was something more commonplace in the world of the ancient Egyptians. It was a force that gave life to objects and connected to the ancient Egyptian idea of the life force called Ka. Through the use of ritual, the ancient Egyptians hoped to enact the transference of this power onto objects or to animate a mummified body for instance in the ceremony of the opening of the mouth and eyes. 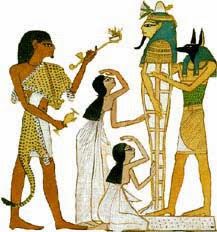 Opening of the Mouth and Eyes

A witch is commonly known as a hag and the mental image we get from the word hag is an ugly old woman.

One of the magic words for which there is no male form, suggesting its original meaning was close to "diviner, soothsayer," which were always female in northern European paganism, and hægtesse seem at one time to have meant "woman of prophetic and oracular powers" (Ælfric uses it to render the Greek "pythoness," the voice of the Delphic oracle), a figure greatly feared and respected. Later, the word was used of village wise women.

Haga is also the haw- in hawthorn, which is an important tree in northern European pagan religion. There may be several layers of folk etymology here. Confusion or blending with heathenish is suggested by Middle English hæhtis, hægtis "hag, witch, fury, etc.," and haetnesse "goddess," used of Minerva and Diana.

If the hægtesse was once a powerful supernatural woman (in Norse it is an alternative word for Norn, any of the three weird sisters, the equivalent of the Fates), it might originally have carried the hawthorn sense. Later, when the pagan magic was reduced to local scatterings, it might have had the sense of "hedge-rider," or "she who straddles the hedge," because the hedge was the boundary between the "civilized" world of the village and the wild world beyond. The hægtesse would have a foot in each reality. Even later, when it meant the local healer and root collector, living in the open and moving from village to village, it may have had the mildly pejorative sense of hedge- in Middle English (hedge-priest, etc.), suggesting an itinerant sleeping under bushes, perhaps. The same word could have contained all three senses before being reduced to its modern one.
http://www.etymonline.com/index.php?term=hag&allowed_in_frame=0

The hag comes from hex and always referred to the feminine in northern European paganism. There is the idea in this word of a hedge which designates a dividing line between two worlds. This fits with the idea of a goddess being at the transition points that intersect the world of the material from the world of the spiritual. In ancient Egypt the goddess Hathor would be present at all events of birth and death. She would have a foot in both worlds of spirit and matter and from this we get the idea of birth and death as forever intertwined. A birth of a baby into the material world involves the death of a soul inside the new beginning. The awakening and re-birth of the soul within the body involves a death to worldly pursuits. The final death of the body allows the soul to be freed to re-enter the home from which it came. These magical events are attended by these emanations of the feminine divine who sit at the crossing points between these worlds.

This idea of the feminine being present at the soul's apparent death and deliverance into the material world gave rise to myths that depicted her as an evil temptress aligned with the devil, the devil being the Lord of the material world. In Greek mythology the legend of the Gorgon Medusa is such a tale. 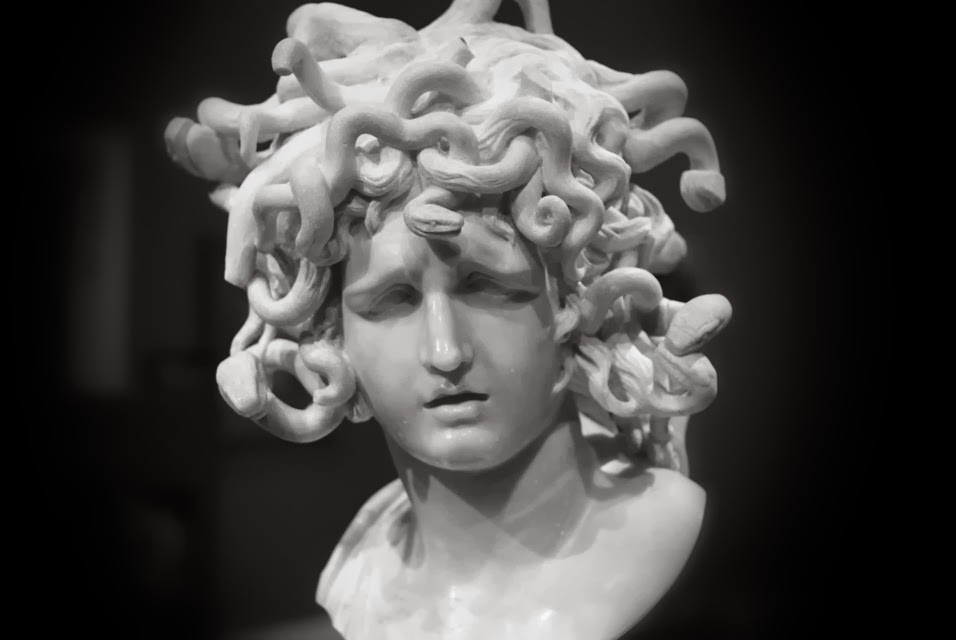 She was at first a beautiful maiden that seduced the soul into the material world (the stone) but as you got closer she became hideous and turned you to stone. Her hair being venomous snakes screams out to me her connection with the feminine divine you would encounter in an altered state. We find these ideas in the definitions provided here:

World English Dictionary
Encyclopedia
hag
in European folklore, an ugly and malicious old woman who practices witchcraft, with or without supernatural powers; hags are often said to be aligned with the devil or the dead. Sometimes appearing in the form of a beautiful woman, a succubus is a hag believed to engage in sexual intercourse with sleeping men, causing severe nightmares and leaving the victim exhausted. Although viewed in most lore as the antithesis of fertility, the hag is believed by some scholars to be a remnant of primitive nature goddesses.
http://dictionary.reference.com/browse/hag?s=t
I believe the same ideas of the hag, witchcraft, the devil, and death are at work in the old fairy tale of Hansel and Gretel. In this story the witch lures the two children into her house after the hungry pair first find her house made of gingerbread and cakes in the forest. The witch locks up Hansel and enslaves Gretel with the intent to eventually cook and eat them. The children are representative of the paired soul that is incarnating. They left home due to the wickedness of their stepmother. The myth making here demonstrating it is the intention of the feminine to force the soul to incarnate. The pair only incarnate because they are lured into the material world. The oven that the witch will cook them in is representing the fires of this material hell. The witch is an emanation of the Goddess, a side of her that is terrifying because she births the soul into the material world. This world is unkind and threatens the soul with death. The Goddess in mythology has a terrifying side, whether that is for example Kali in Hindu mythology, Medusa in the Greek stories, or Sekhemet the raging lioness destroyer in ancient Egyptian lore.

Gretel manages instead to shove the witch into the oven and burn her. The underlying idea here is the soul is freed from its enslavement in matter. The two find a vase full of treasure and precious stones belonging to the witch and then a swan ferries them back home across the waters. The treasure is the material wealth of the Goddess; the swan is associated with the idea of a hermaphrodite; and the waters are material incarnation that must be crossed to make it home. 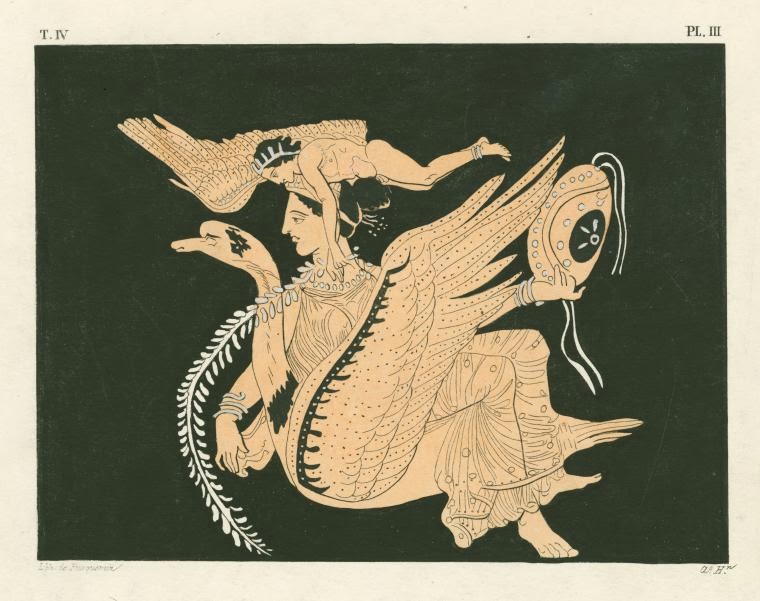 The hermaphrodite is an interesting concept in mythology not understood. It is the pairing of Aphrodite and Hermes which in ancient Egypt are Hathor and Thoth. 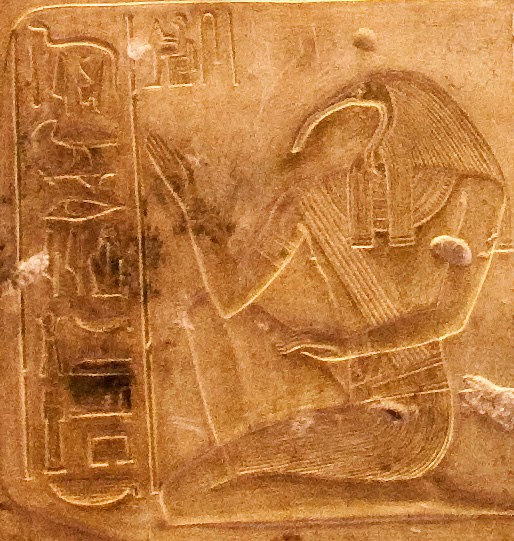 Here we have the goddess of love combined with the god of wisdom to make the hermaphrodite. The deeper meaning is one of the paired soul of masculine and feminine halves. When they unite, they sail over the waters of material incarnation and head back home to their spiritual abode. It was encoded in this story as Gretel and Hansel. We can find this motif in many other places and here are a couple that come immediately to my mind:

in a book called "The Yellow Cross", which is a story of the Cathars of southern France last stand against the Catholic inquisition who persecuted them for their perceived heretical beliefs, the author writes about this belief of theirs:

According to script Catharism the foetus was a creation of the devil which awaited its redeeming soul. Moreover, some Cathar versions of the Fall averred that the devil seduced the souls away from their heavenly home by introducing it a beautiful woman whom all the souls desired to possess.
The Yellow Cross, Rene Weis, pages xxiii to xxiv.

I believe this idea of theirs comes from the beginning of Genesis 6 which tells the story of the sons of God lusting after the daughters of men.

Genesis 6
King James Version (KJV)
1 And it came to pass, when men began to multiply on the face of the earth, and daughters were born unto them,
2 That the sons of God saw the daughters of men that they were fair; and they took them wives of all which they chose.
3 And the Lord said, My spirit shall not always strive with man, for that he also is flesh: yet his days shall be an hundred and twenty years.
4 There were giants in the earth in those days; and also after that, when the sons of God came in unto the daughters of men, and they bare children to them, the same became mighty men which were of old, men of renown.
5 And God saw that the wickedness of man was great in the earth, and that every imagination of the thoughts of his heart was only evil continually.

I have written a blog post called let the sleeping giant lie that goes further into this curious passage in the beginning of Genesis. Further to this idea we find in Hinduism a goddess called Kali, who as an emanation of Durga who comes from the Great Goddess Devi, is the personification of horror and death. Much like the Egyptian Sekhemet, Durga is a terrifying goddess who subdues demons and has an association to felines as she rides a tiger, eliciting comparison to the great goddesses of the levant who are shown subduing large cats.

Levantine forms of the goddess Hathor: Qadesh, Ishtar, and Asherah

Kali's flesh is black, she has menacing fangs, and wears a necklace of skulls. Kali appears in the material realm full of power to destroy and a laugh that mocks all who try to escape. Her arms represent the cardinal directions in combination with the cycles of time and there is no running from her power over life and death. But once you accept your fate in the material world then Kali gives bliss in the form of offering a bowl of plenty. 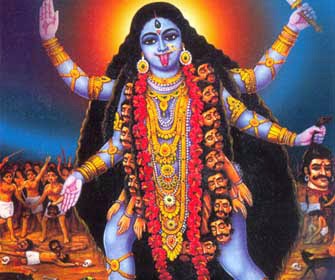 The idea of the hag in the mythological past is varied and had evolved into something that was negative and to be feared. For sure, this idea of leading your soul into material incarnation is something to be feared but the ancients looked upon it as a necessary journey in order to procure eternal life. The idea of Kali offering a bowl of plenty to the enlightened traveller or Sekhemet being pacified by turning the Nile into intoxicating beer after first being sent to destroy mankind, suggests that the power of the feminine divine to cause misery and destroy becomes part of the necessary elixir that transforms the soul into something greater.
Posted by Apollo at 10:25 PM 0 comments