mary and the light

The divine spirit that is active created the universe and everything that has come forth from it. That spirit is present and explained in the opening of the New Testament Gospel of John, a tract that is quite disparate when compared to the other canonical gospels. I'm referring to the 'Word', with this Word being understood in Christian theology as a prefiguring of Jesus Christ. The first verse states that this Word was a first principle, hung out with God, and was in fact God.

That's quite an assertion to start off with. What does it mean? Let's get the meaning of God out of the way first. In the original Greek, God is from theos which means divinity, of the divine, the supreme deity. Word is from logos which means speech. But not simple speech, instead speech that contains reasoning and intention, in other words a calculated command to create. This Word is the be all and end all as the last idea claims the Word is God.  This is telling us that within the godhead is this power to create ex nihilo. However when all was put in order the Word became flesh as explained in verse 14:

And the Word was made flesh, and dwelt among us, (and we beheld his glory, the glory as of the only begotten of the Father,) full of grace and truth. (KJV translation)

The Greek word for dwelt is skeeno and it means to encamp and comes from skenos which means a hut or temporary residence, figuratively the human body as an abode for the spirit. The idea is that the human body is a tabernacle for spirit. You can start to see the disservice that has been done to mankind in the name of translation. Among is from the Greek en which can also mean 'in'. This passage in its true meaning is esoterically explaining that this impulse to create through intention entered into the flesh of a beast which became man - us. Extrapolating from this thought you can see why I insist that we are light; a fragment of the light known as the Logos. From verse 9:

That was the true Light, which lighteth every man that cometh into the world. (KJV translation)

But going deeper think about this: the Word ceased to be active as an ethereal creator but entered into us and we were given the power to create. We are now the creators of our world which is pretty self evident when you look around. We create our reality through intention. It is then pretty clear that this world is truly an illusion, an illusion because it is of our making and intention. I mean that in the sense that when our thought becomes action through intention we are in effect taking part in creating our universe. The word intention is key here. You can now see how important having an intention is because of the power within us to manifest that intention. We are creating reality, we are the masters of all this now. I believe we can create and we can also heal through intention. It's not a placebo effect, we can heal.

In closing check out verse 5:

And the light shineth in darkness; and the darkness comprehended it not. (KJV translation)

Comprehended is from the Greek katalambano which also means to seize and possess. The darkness vigilantly seeks to seize and possess this light to learn of its secrets but it is never totally successful in its efforts. We are a fragment of this light and upon walking the path that leads you to a remembrance of this truth you will discover the hidden light within you. It's the underlying concept of Namaste of the Hindus and Amen of the ancient Egyptians and early Christians - the recognition of the hidden god within.

The darkness in the gospel stories tries to put to death the light, however it always returns.

The Romans and Jewish authorities leave the Light for dead

Within humanity the light has been assailed and left for dead for centuries but in tandem with the great Goddess (the Marys that are always with the Light), the light is rising once again. The understanding of the concept of the Logos in the Gospel of John, which has been misconstrued for two millennia, is coming forth once again. The light can only be suppressed for so long before it will once again shine upon those that seek it out.

Remember the light is with God and is God. This is hinting at our origin, only hinting to us because we have lost the tools necessary to understand what this means, but the knowledge is available to the curious and open minded. This referencing of God is referring to the divine, specifically the one, the all, and the source. It's the union of everything; the fount of all existence properly interpreted as a hermaphrodite but conceptually can be considered the great Mother Goddess. She can conceive and give birth without the need for a male partner, hence the symbolism we find in mythology of the virgin. It is the Light she births; the Light separating from the great mother, as it was with her originally, and as an aspect of her the Light then enters into this realm of time and space and enacts the creative process. The ultimate evolution of its purpose is to eventually incarnate into mankind who then become the creators of their own reality. And here we stand at this point in history.

My thoughts sometimes are uncontrollable and I feel the need to understand and reconcile this aspect of myself. See it is like this: I feel like I am in full control of myself and actions for the first time in my life and with that does come a responsibility because I am fully aware and conscious. In relation to that anything I do is done with purpose and understanding. However my thoughts flow freely and run the full gamut. They venture off into some territory I find uncomfortable but it does happen and I can't deny it. I have mantras that can clear my mind if I want to dismiss these thoughts but the curious thing is that they still do manifest. I feel like the path I have been traveling for the last seven years has definitely put me into a higher state of consciousness and that is why I am troubled these thoughts still sometimes occupy my headspace.

After meditating on this aspect of myself I have decided to accept it for what it is. They are just a part of who I am and I shouldn't feel guilty or ashamed of them as long as I don't act upon them. Philosophically speaking, thoughts and words become powerful when combined with intent. It is then a short step to acting upon those thoughts once the intention is there. Of course that works both ways in that if the thoughts are positive and you develop an intention towards fulfilling that dream then pretty soon you will realize that dream. This seems like a roundabout lesson in intention.

Intention is the most important aspect to bring to plant medicines. A fully formed intention is the way you will benefit and receive the most healing and conversely entering into the sacred space minus an intention will reduce the efficacy of the experience. If you use these sacred plants for recreation and amusement instead of healing, the plants themselves could become mentally toxic. As my shaman said "come to play, eventually you will pay." 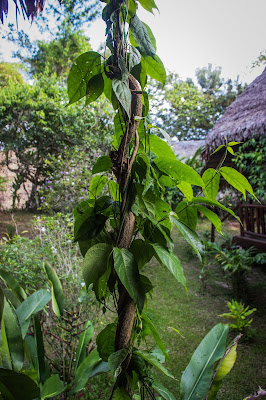 It is interesting that in sacred traditions we see this idea concerning intention. In ancient Egyptian thought it is the god Ptah that speaks creation into existence. 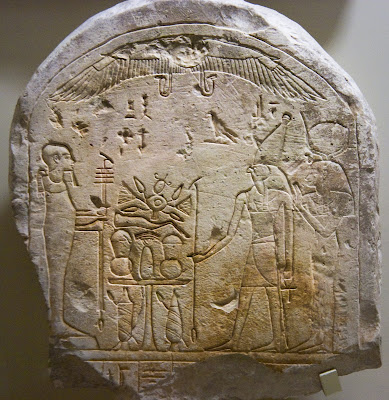 Horus and Isis in the presence of Ptah

This idea is echoed in the opening chapter of Genesis in the Old Testament with the command to manifest always spoken with intention which results in creation. In the Gospel of John in the New Testament it is through the 'Word' that all was created:

1 In the beginning was the Word, and the Word was with God, and the Word was God.
2 The same was in the beginning with God.
3 All things were made by him; and without him was not any thing made that was made.
4 In him was life; and the life was the light of men.
5 And the light shineth in darkness; and the darkness comprehended it not.
6 There was a man sent from God, whose name was John.
7 The same came for a witness, to bear witness of the Light, that all men through him might believe.
8 He was not that Light, but was sent to bear witness of that Light.
9 That was the true Light, which lighteth every man that cometh into the world.
10 He was in the world, and the world was made by him, and the world knew him not.
11 He came unto his own, and his own received him not.
12 But as many as received him, to them gave he power to become the sons of God, even to them that believe on his name:
13 Which were born, not of blood, nor of the will of the flesh, nor of the will of man, but of God.
14 And the Word was made flesh, and dwelt among us, (and we beheld his glory, the glory as of the only begotten of the Father,) full of grace and truth.
John 1:1-14King James Version (KJV)

'Word' is from the Greek 'logos' which means thought that has been turned into speech. So it's not the concept of the word we know from grammatical studies, instead it is much deeper in meaning. It is the action behind thought, a verb if you will. It is in a way intention manifest. To me this makes sense as life is properly a verb. It is always changing and moving, and coming forth. Nouns are really dead inanimate things. This Word is called the light of mankind and used here to describe the Christos. Starting in verse 3 the Greek word 'autos' translated as 'him' also means 'self', 'her', or 'the one'. It's just translated as masculine because well you know… bias, patriarchy, and the like. Anyway in verse 14 the Greek word 'en' translated as 'among' also means 'in'. The Word dwelt in us. It is describing the light that is your soul residing in you and how it is ultimately connected to the divine because the Word was God, God coming from the Greek word 'theos' which means divine. We are the Light and we are Divine. This light is the ultimate expression of energy in its purest form and that is us, the divine. If you dig deep enough you can still find elements of this truth buried in ancient wisdom books.

When we as humans recognize the light within us and our own share of divinity then this becomes such an important concept that demands our attention. Our thoughts and words do matter and it is through intention that we make them actionable. It is ultimately the lifeblood of creation on a grander scale.