where do babies come from?

At some point in our young lives we ask this question and then later in life we attempt to answer this question posed by our children. I always preferred the image of the stork delivering a baby to a household wrapped in fabric. 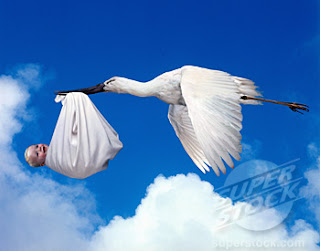 
A quick check on the internet reveals that this legend may have originated in either ancient Greece or northern Germany many centuries ago. The stork, being a migratory bird, was seen returning to its nesting site in the early spring from the warm climes of Africa as everything was undergoing a re-birth, hence the reason why some believe this to be the origin of the myth. Plausible enough, however it's a designation that could be applied to a bevy of migratory birds, not just the stork. For instance there's a pond just up the street from me that is home to the same extended family of Canada Geese that return every spring. They return as mates and soon are constructing a nest in anticipation of the babies that will soon follow.

Being of the curious sort I decided to chase this down the old rabbit hole.

I always like to start in ancient Egypt and seeing that the stork is indigenous to the African continent I was confident the world's greatest natural philosophers could help me out with this. The hieroglyph for the ancient Egyptian concept of our immortal soul, the ba, is the saddle-billed stork.

Time for a quick lesson on the ba. The ancient Egyptians thought of the human being as having nine constituent parts, eight of them being immortal and the ninth, the body, that could decay after death. The ba is our hidden immortal light that comes to incarnate in our material bodies. In the daily cycle of the sun the Ancient Egyptians would describe the sun coming to the earth as Atum-Ra and depict it as a ram or an old man. It can also be thought of as Amen-Ra, the hidden light of the sun. Much like Atum-Ra, there are many examples of Amen-Ra being depicted as a man or a ram. Why a ram you may ask? That might get a little off topic here and would need to be tackled at another time however it's useful to point out the ram's bleat is the sound "ba". In the mythos the light once encapsulated within the human being, the house of conception known as Isis, would be wrapped in linen and depicted as the mummified form of Osiris. The ancient Egyptians were also fascinated by the magic of words and you can often find correlating ideas in the reverse spelling of their words. As an aside I'm forever telling my daughter that words are magic, that's why we spell them! The reverse of ba would be ab, which is the heart. To the Ancient Egyptians the heart was the symbol of where the accumulation of your deeds and wisdom would rest and it acted as your conscience and vehicle to enact your transfiguration. The weighing of the heart scene in the Pert Em Heru tells us your heart must be as light as a feather if you wish to join the glorified souls in the afterlife. If not then your heart would be gobbled up by Ammit the devourer.

Due to our Judaeo-Christian upbringing we would think of this most unfortunate result as being sent to eternal damnation and egyptologists will describe it as such. It's not an apt description of what is being depicted here however if you never change then I guess there is some truth to that. I should also touch on the concept of the ka. The ka is your manifestation, the life-creating force, on this plane of existence. The ancient Egyptians described not only humans but animals, plants, water and minerals as having a ka and the hieroglyph for ka is a bull; a bull being a great symbol for the dynamism of material existence. You will have many kas before your journey is over but only one ba. Your ba makes each ka and is the vessel that carries your multitude of kas.  The Ancient Egyptians symbolized this with the ram neter Khnum who was known to fashion humans on his potter's wheel.

After your ba has made a new ka this new material life force is now able to house its ba. To incarnate into matter once again is a perilous journey for the ba and is mythologized by the story of Osiris being hacked to pieces and scattered throughout Egypt by his nemesis Set. Isis, after much weeping, then embarks on a quest to retrieve the remains of Osiris and puts him back together in order to engender a new life, the offspring known as Horus. In this reconstituted form Osiris' mummy is depicted wrapped in a fine single strip of white linen. Also of note is the child known as Khonsu who is closely associated with Horus.  Khonsu, as a child of Amen and Mut, represented the child waiting to be born inside of us - in this case the mother womb known as Mut. In this aspect Khonsu would be depicted as a mummiform child, wrapped in linen, awaiting birth to take his rightful place on the throne of man as Horus. Khonsu in the pyramid texts is referred to as the one who lives on hearts. This is generally thought of as a bloodthirsty aspect of Khonsu however it is really telling us that it is the heart that will ultimately feed and quicken the birth of the enlightened soul in us.

Alright so I'm thinking that the word baby might have some connection to the ba of ancient Egypt due to the hieroglyphic for ba which is the stork and the way the baby is delivered by the stork wrapped in linen. However the word baby does not have a clear history or meaning that correlates in this regard. Our old friend, the Online Etymological Dictionary tells us to look up the word "babe" instead and reveals this of the word:


Slightly amusing is that the word "babe" can be traced in many languages as the word for an old woman or a peasant woman while nowadays we call an attractive women a babe! There is also the word "body" which has intrigued me for awhile.  The Online Etymological Dictionary reveals this of the word:


This is interesting because our body is a container for the immortal soul called the ba. The old word botah has an ending 'tah' that is a common ending when describing something that has material form such as a place or land and in ancient Egypt land was feminine and given the half circle hieroglyphic that is phonetically rendered as 'ta'.  Also well known is the transpositional nature of the letters d and t throughout the history of languages which accounts for botah becoming body. I'm willing to connect the ba with the ta being our body though I'm sure it could be considered a stretch. Given the evidence I've presented above I think it's plausible. As well the connection of baby to a peasant woman can't be ignored since it is the woman, Isis, within us that is the womb of the ba that has incarnated into matter. Everyone's ba is associated with this woman waiting to be born.

The tantalizing thing for me is the connection of the word babe to an old woman. I bet you don't have to get too far into the Old Testament and the story of Abraham's wife Sarah before you start asking yourself some serious questions about where those myths come from.
Posted by Apollo at 12:38 AM 0 comments