the guide of my soul

My dog, the love of my life, passed away last month at the age of 16. She lived well past her allotted years on this earth because I was not ready to give her up. All my life I've had a special connection with dogs and I sometimes wonder if they have an unrecognized sense; a sense that recognizes your emotions or state of mind. At any rate she was the catalyst that started me questioning everything around me and all that I had taken for granted. I was looking into the food I fed her when she was a pup and that was an eye opener to say the least. That was pretty much the end of trusting authority or society when it came to matters of importance that I can keep some nominal control over. This all leading to the journey I'm still struggling with; the unfinished story of my search for meaning. It allowed me to cast aside the fraudsters, manipulators and baggage carousel full of shit that I had acquired throughout the first half of my life.
In ancient Egyptian mythology canines are well represented, with the two pre-eminent jackals being Anpu and Wepwawet. I imagine they are better known by their Greek monikers of Anubis and Ophois. Normally I find the Egyptian representation of their names more instructive when you are trying to figure out what they represent as opposed to the Greek translations that have filtered down to us westerns. However in this case Wepwawet’s translation into Ophois is instructive as we will see later.
Dogs are instinctively inclined to lead and guide hence the success we have had in breeding them as guide dogs for the blind. They also love to dig; a groundskeeper at a dog park can attest to that. Plus they love to bury bones. My dog dug a hole in the couch and buried a bone in it once. Then she sat there and whimpered at it. Dogs also make great watchers or guarders of property as well as being natural shepherds.
The great natural philosophers of ancient Egypt would of course have taken note of these traits and adapted them to how they perceived and understood the world around them. This is a good time to discuss the meaning of the animal deities that you see in the Egyptian pantheon. When you look around the natural world and discover the powers existent in animals and nature that are not within you, you can then rationalize them as being part of the divine that is manifest in our material world. So the next step would be to give these powers a 'face' and that is what happened. The watcher who sees all is the jackal. Anpu sees all; there is no hiding from him. Here is Anpu being the arbiter of the soul in the weighing of the heart scene: 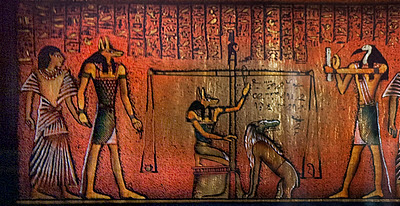 The guide of the soul that leads the entrapped ba soul through the darkness of incarnation, is the opener of the ways, Wepwawet. 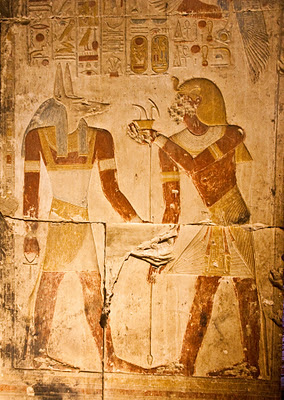 For this blog entry I'm going to concentrate on Anpu and then I will follow it up with an entry on Wepwawet that I promise will be worth the wait. This entry on Anpu will focus more on getting an idea of what the ancient Egyptians were representing with their depiction of a jackal that was always present in tombs and on occasions of death.
Here is Anpu presiding over the mummification ritual which is the symbolic re-setting of the broken and scattered bones of Asar (Osiris). See my two part blog entry to understand the meaning behind mummification. 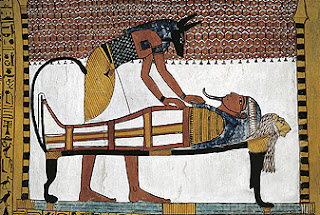 The night sky constellation that we call Ursa Minor/The Little Dipper contains within it seven stars that never set in the evening sky. They are always on watch. 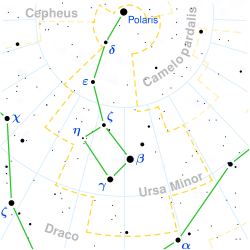 Polaris has a rich tradition in ancient civilizations and has been known by many names. The Greeks called Polaris Kynosoura, which means "the Dog's Tail." The english equivalent is Cynosure. We get this definition from Dictionary.com:
cy·no·sure
noun
1.
something that strongly attracts attention by its brilliance, interest, etc.: the cynosure of all eyes.
2.
something serving for guidance or direction.
cynosure. Dictionary.com. Dictionary.com Unabridged. Random House, Inc. http://dictionary.reference.com/browse/cynosure (accessed: October 22, 2011).

Canine comes to us via the greek Kyon:

And just for fun here is the origin of the word for Procyon, which is the brightest star in the constellation Canis Minor:

Procyon
bright winter star in constellation Canis Minoris, 1650s, from Latin from Greek prokyon, from pro "before" (see pro-) + kyon "dog"; so called from its rising just before the "Dog Star," Sirius.
http://www.etymonline.com/index.php?term=Procyon&allowed_in_frame=0
Polaris has also been known as the Judge of Heaven, the Pathway, the Highest Peak of the World Mountain and Stella Maris "Star of the Sea" among others.
In Richard Hinckley's book "Star Names - Their Lore and Meaning" we read this about Ursa Minor:

(Peter) Jensen sees here the Leopard of Babylonia, an emblem of darkness which this shared, there and in Egypt, with all other circumpolar constellations; while on the Nile it was the well-known Jackal of Set even as late as the Denderah zodiac. This Jackal also appears in the carvings on the walls of the Ramesseum, but is there shown with pendent tail strikingly coinciding with the outlines of the constellation.
Star Names: Their Lore and Meaning, Richard Hinckley Allen, page 450

In the Circular Zodiac in the temple of Hathor at Denderah you can see in the innermost circle at the centre the Jackal representing Ursa Minor. 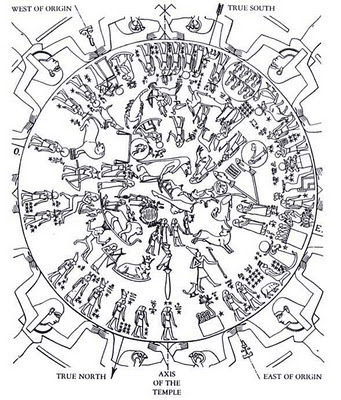 So it's pretty clear that Anpu was a representative of the circumpolar constellation of Ursa Minor. This was a constellation of imperishable stars that never set; they always stood on watch and were a guide to to the deceased.

Epithets of Anpu include "He Who is Upon the Mountain", "Chief of the Divine Pavilion", "He Who is in the Place of Embalming". What do these monikers mean?
Egyptologists will tell you that Anpu was the guardian of the dead and therefore the epithet "He Who is Upon the Mountain" means he would keep watch over the necropolis from this perch and would be at the ready to intervene in case of vandals intent on desecrating or destroying the tombs. It is true he can be the guardian of the dead but it's the meaning of death here that is obfuscating his true role. As I've detailed before the symbolic act of mummification is the reconstitution of form that enables re-birth. It is the dead soul that is entombed in matter that Anpu is keeping watch over. The mountain that he is on is the world mountain that rests on the celestial north pole otherwise known as the axis mundi and we can ascertain the validity of this claim by pointing out the connection between Anpu and Polaris. However it is true that because Anpu watches over us he will be present after material death when the soul is released from the bindings of incarnation. Anpu is the deity that supervises the weighing of the heart on the scales against a feather. His judgment determines whether Djehuty (Thoth) would record a positive or negative verdict in the book of life. Since it is Anpu who watches over us and sees all he is the perfect representation of this principle.
In the book "Theological Dictionary of the Old Testament, Volume 4" the authors tell us:

Anubis, "lord of the necropolis," is the judge of the dead; from the Old Kingdom onward the jackal hieroglyph stands for "judge" as an official or honorary title.
Theological dictionary of the Old Testament, Volume 4 By G. Johannes Botterweck, Helmer Ringgren, pages 2-3

In folklore there are also examples of the jackal being the judge, such as in the children's fable "The Ungrateful Lion".
"Chief of the Divine Pavilion" is revealing to us that Anpu was the deity who was lord over the watchers of the world mountain that was located at the celestial north pole. "He Who is in the Place of Embalming" tells us that Anpu is present while the soul is being entombed in matter, i.e. Anpu, or the natural power he represents, is very real and present in our world. Once the mummification is complete it is Anpu who leads the Opening of the Mouth and Eyes Ceremony, transliterated as wpr in Ancient Egyptian hieroglyphics, that allows the soul that is in a sleep of death, to regain its senses by allowing light and (spiritual) nourishment to reach the soul entombed in matter. Priests wearing a mask of Anpu would symbolically open the mouth of the newly mummified.
Anpu was the son of Asar (Osiris) and Nebet-Het (Nephthys). The story goes that one night Nebet-Het disguised herself as her twin sister Aset (Isis) and seduced Asar resulting in her impregnation with Asar's seed. Digging a little deeper into this puzzling story we can deduce that Anpu is the result of the lesser material mother combined with the higher soul in contrast to the higher soul mating with Aset, who is the representative of the highest material form. Asar and Aset produce the divine child Heru (Horus) while Asar and Nebet-Het produce the highest form of the unenlightened beast - the canine. Anpu is instinct that has been subdued by reason. Here is where we see the ancient Egyptian shared experiences with a dog come to fruition. As humans we have knowledge of right and wrong and we should know better when we do things that defy reason. A dog does not know better yet can control its instincts and desire much better than we can and thereby live in harmony with us.
Next up will be the Opener of the Way, Wepwawet, the dog star.
Posted by Apollo at 5:40 PM 0 comments

back again.
my addiction.
my innermost siren,
humming my destruction.
you leave.
you always return.
i sense your absence.
i curse your return.
i'll make the choice.
it's my responsibility.
either you win,
or you are subdued.
oh great adversary!
my unconquerable rival.
lay down your weapons,
for i am you.
Posted by Apollo at 11:29 AM 0 comments