I have touched on previously the connection of physical potency, especially in terms of male gods, to rebirth. The remembering of Osiris by his sister-wife Isis probably being the one that I tend to reference. The idea of remembering has a dual meaning, in that you need to know about the divine that is resident within your heart and awaken it but also Osiris' torn and scattered parts must be gathered up by Isis and re-assembled. The primary goal of this remembering is to make Osiris' 'member' erect so that Isis can be impregnated with his seed and birth our enlightened self, which was called Horus. Osiris was no doubt considered very potent and a giver of life which we can see in his role as a vegetation god, with the vegetation cycle being recognized as one of the natural power latent within him. To this point he would appear on temple walls with his skin green to denote his potency. 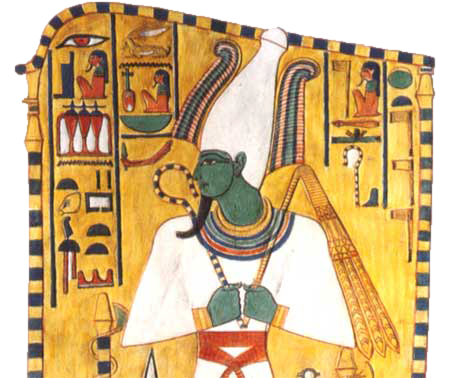 
Green and sexual potency has made it into our modern languages. Green in French is vert and undoubtedly influenced our English words such as vernal - springtime, verdant - nature all lush and green, and virile. Virile also gives us a big clue to its ancient origins:

That one jumps right out at me. Virile coming from a Latin word virilis that is derived from vir, which is a man who is a hero. This hero, Heru-Ur/Heruwer/Haoeris/Horus the Elder was well known in ancient Egypt, the great light whose eyes were the sun and moon. The 'u' or 'w' being interchangeable in the transliteration of Egyptian hieroglyphics and filtering down through time and cultures as a 'v'.
http://en.wikipedia.org/wiki/U As an aside, did you know that the word hero supposedly has no connection to the greatest hero in the greatest hero journey of them all, the ancient Egyptian Heru, known in greek as Horus? Instead it is said by institutional linguists to come from a Proto Indo-European root word 'ser'.

So the virile hero in ancient Egypt is the Osiris/Horus story which is in reality the story of our soul and its journey into and out of matter. This is symbolized in the night sky as the journey of the great giant in the sky, Orion. This Orion at times can be quite the fighter as two of the stars that make up his constellation have direct associations with the concept of battle and war. Those would be the left shoulder known as Bellatrix "warlike, skilled in war" and the right leg Saiph "sword". I went further into this topic in my blog post called War, what is it good for?

So the great man of the sky, Wer, has an association with the concept of war.

war
late Old English (c. 1050), wyrre, werre, from Old North French werre "war" (French guerre), from Frankish *werra, from Proto Germanic *werso (confer Old Saxon werran, Old High German werran, German verwirren "to confuse, perplex"). Cognates suggest the original sense was "to bring into confusion." There was no common Germanic word for "war" at the dawn of historical times. Old English had many poetic words for "war" (guð, heaðo, hild, wig, all common in personal names), but the usual one to translate Latin bellum was gewin "struggle, strife" (related to win). Spanish, Portugeuse, Italian guerra are from the same source; Romanic peoples turned to Germanic for a word to avoid Latin bellum because its form tended to merge with bello- "beautiful." The verb meaning "to make war on" is recorded from mid-12th century.
http://www.etymonline.com/index.php?allowed_in_frame=0&search=war&searchmode=none


The Latin bellum is interesting in its connection to the concept of a struggle or a battle. Ultimately that word can be traced to a Semitic origin, Bel or Ba'al. This deity having the connotation of lord or father. It is a fascinating topic to trace the topic of Ba'al and its condemnation in Jewish literature. I'll have to leave it alone for now though it is tempting to establish the identity of this god and why it has a relationship to battling.

The word urine also retains a connection to war and the constellation of Orion. I commented on it in my previous blog post that I referred to earlier and I'm going to copy and paste the relevant passage here:

The name for Orion relates to urine in greek. Greek mythology describes the origin of Orion as the result of a meeting between Hyrieus of Boeotia and the gods Zeus, Poseidon, and Hermes. Hyrieus at the time did not know they were gods but entertained them with great hospitality anyway. When the gods revealed themselves and thanked Hyrieus they granted him a wish. Hyrieus wished for a son which the three gods engendered by either urinating or ejaculating into a bull's hide and burying it into the ground. The child Ourion was born nine months later. Clouding (ha ha) this story a bit is I'm unsure if two thousand years ago urine referred to the waste product from the kidneys or seminal fluid or both. It seems to be a term used for fluid that is secreted. Here's the history of the word:

It makes a great deal more sense if urine is referring to the seminal fluid that engenders life as opposed to waste secretion. The word urine, with its suffix ur- leads me to believe it would have more of a connection to light. So what then of the word semen? Where does this come from? Its known etymology leads to a dead end:

However since I'm very familiar with the constellation of Orion and the biblical allusions to it, let me be so bold as to suggest a different path for the origin of the word semen. There are these giants in the bible called nephilim that I wrote about extensively in this blog post called Let the sleeping giant lie.

Their leader was a chap called Semjaza and the story is quite plausible an allusion to the constellation of Orion. I'd connect the sem in Semjaza to the word semen based on the name of one of the three sons of Noah in the bible. This son's name is Shem and it has a connection to a Hebrew word for the heavens, Shamayim. Genesis chapter 11 goes to great lengths to establish the ancestry of Abraham to Shem. It is because of this relationship that the people who trace their lineage back to Abraham are known today as semites (we drop the h in the Sh when anglicizing the name). In my blog post Light my way, I made notes of the relationship between the story of Abraham and Sarah to the journey of light and specifically how that journey parallels the story Osiris and his wife Isis.

One of the prominent features of Osiris is his crown, the Atef.

The Atef is a white heliacal shaped crown surmounted by two ram's horns. The symbol for the ba soul is the ram and the ram is known for its sexual proclivity. In this aspect Osiris belongs to a class of old world virile gods who often sprouted horns such as Dionysos, Bacchus, and Pan and these gods had connections to the ram or goat. Dionysos was turned into a goat by his father Zeus, Bacchus comes from a word for he-goat, and Pan has the horns of a goat which is why the ancient Greeks equated him with the city of Mendes, the Greek name for the ancient Egyptian city Djedet which was also known as Per-Banebdjedet.  The Lord of the ba in Djedet. 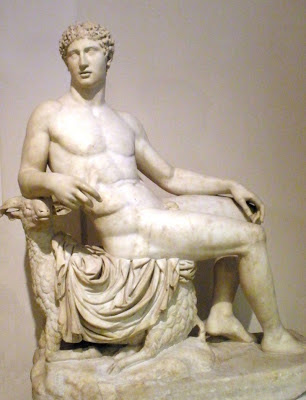 Dionysos sitting on a goat

The words horn and corn are synonymous, with the mythical unicorn giving away this connection. Furthermore the words corn, horn, and grain are all related: